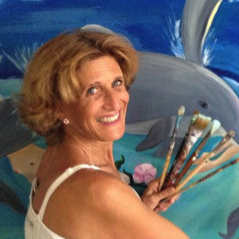 Make the decision to embark upon The Camino de Santiago, and your pilgrimage begins.  June 10, 2011 I was walking my bold 8 lb. chihuahua, Ivan, along the intracoastal waterway path in Bryant Park, a few steps from my apartment in Lake Worth, Florida. I met for the first time, I thought, but later discovered we had met before,  Jim Peele, the former director of The Lanaan Art Museum, in a classic art deco building, which now housed The Cultural Council in our small seaside city.   The very first thing Jim told me when he met me was , “You should walk the Camino de Santiago”.  Thrilling!  I actually had heard about this spiritual pilgrimage.  I combed my mind to recall … Paolo Coella, the Brazilian writer had written about his experience, as had Shirley McClaine. 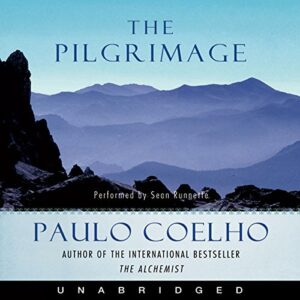 This pilgrimage was loosely on my bucket list.  It was my birthday, the following day and I was receiving the best birthday present, fulfilling a spiritual longing  that has driven my life.  I then and there decided that I would join the thousands, who had  since early Christendom, walked from France across the entire north of Spain, 600 miles, to arrive in Santiago de Compestello, be a pilgrim on “the camino” before the summer was up.  I was leaving for England, knowing that I would use England as a jumping off point to visiting various places in Europe, this would be the trip of a life time.  Jim, a wine connoisseur, came to my place with a bottle of  fine Rioja wine, (from the Rioja valley, along the camino) to further assist me with a plan. I obediently took notes to purchase everything on my list.  Jim made strong recommendations as to what items would be essential for me on this adventure.  He had walked the Camino over ten times, taking many different routes, as all roads lead to Santiago.   Important would be my shoes, my socks, “Thurlos” , the medical kit including treatment for the inevitable blisters, my light weight, but structured pack, my water bottle, my light weight sleeping bag, and only 1 change of clothing to keep the weight I would carry to a minimum.  As I described in a different blog post, my Camino had took on great meaning in the UK, with magical moments in Bury St. Edmonds, and Canterbury, strongly related to St. James.

August 10, 2011 I flew from London to Biarritz in the wee hours to arrive 7 a.m.. Petra, a Czech woman living in London, teaching school, and I met debarking the plane, aware that we were both traveling to St. Jean Pieds de Port to officially begin our Camino.  Together we shared a magnificent, memorable day….   Biarritz, a beautiful seaside city was slowly opening up for business.  We had some errands to run and had an adventure in the city, speaking my rusty french to locate an eyeglass store and a bank.  At the beach I had my first “Camino” magic… I found my walking stick.  The shore was pristine and flat, a much browner colored sand than our whiter/grayer sand in Florida. This well-used tool for the camino clearly presented itself to me by washing up on a barren shore in front of me.  Exquisitely smoothed by the sea, the perfect size, and the significance recognized by me.   I had to take a dip in the chilly Atlantic.  It is a long walk out to where the sea meets the sand.   Seaside restaurants overlooking the expanse of Biarritz, serving the fruits of the sea abound.  We found ours and shared a meal with a California couple we met.  It was then time for the bus to the train.  The train  into the Pyrenees, with glimpses of white water rivers, rafted by adventurers out the window.

Pilgrims are everywhere when we reach St. Jean.  The tourists are flooding the restaurants.  I didn’t want to miss the light, which illuminated the Roman walls, and the sort of Swiss Chalet vernacular mountain architectural that either is free standing or built into the old ruins.  By the look of the pitches roofs, it must get cold and snowy in winters in St. Jean.    Trucks jockey through the narrow cobblestoned streets.  I know I must unload.  My pack is too heavy for the first days of the walk through the Pyrenees.  This is said to be the most difficult part of the walk.  I am absorbing the inner meaning of the journey.  Let go of everything that doesn’t serve me.  It is a cleanse.  Lighten my load.  I walk the town.  My back is sore.  I carry far too much.   The message is “lighten my load” .  I start getting silly about unloading all my art supplies, as I have this notion about painting all along the Camino.  Side note …The Camino takes you…you don’t take it.    I think I could possibly draw on napkins…I ended up leaving my hairbrush, some art supplies, laundry soap, cut my towel in half, …  only essentials…only essentials…. another lesson of this walk…

Lessons of the Camino Day #1:  St. jean Pieds de Port- Roncesvalles…. 1)  Take Whatever is Offered to you… as it is truly of God…  2)  Give freely… as it is truly of God…3) Go With your first instinct…DO NOT QUESTION IT.  As I was walking the lessons came as insights.  I thought of that book, The Celestine Prophesy.  I walked with Florence, her sister Fabien, cousin Denis, friends Beatrice and Cecile.  Florence offered to carry my pack.  This was a gift from God.  They had , through her sister’s fine organizational methods had their packs sent from stop to stop, a kind of modern day convenience, for purists unthinkable…The Camino had been walked by thousands of pilgrims since the 600s. ” The Battle of Roncesvalles took place in 778 at a mountain pass in the Pyrenees, near the village of Roncesvalles in northern Spain. The rearguard of Charlemagne’s army was attacked by the Basques and massacred; one of the nobles, Roland, was killed, an event celebrated in the Chanson de Roland (in which the attackers are wrongly identified as the Moors). ” (WP Dictionary)

The French invited me to lunch with them, as we walked together.  It was so kind and I was so honored.  They were so hospitable, and we really enjoyed our sharingThey invited me to stay with them the first night at a gorgeous hostel that Fabien had cleverly booked… (again the purest snootily turning up their noses at any hint  of  comfort… there are some who actually carry a cross!!!! or tent the entire way…Sangria, Dinner of Trout… I noticed the meditative way that I was eating, taking the time to observe every bite of the food and savor the textures, the flavors, the tastes.  I also noticed myself on the path observing every breath.  I was practicing Yoga, as I watched the breath come in and as I watched the breath go out.  I was up in their little tiny room all night, having to pee almost every hour…I felt terrible, but no one moved the whole night, so perhaps they were faking, or actually sleeping…I was embarrassed.  Gorgeous breakfast in the old monastery of stone, stone walls, polished stone floors.  When I was a teenager, I had the opportunity to travel throughout Spain and Portugal with my parents and younger sister, Robin.  We often stayed in “paradors”, which are converted monasteries, just like the one where I resided for a night with some fellow pilgrims, fellow travelers on this journey on earth.

We had another beautiful day of walking in forests, and down a treacherous slate path,slick and polished looking as ice at a 60degree angle, built by the Spanish foolishly , a nightmare to traverse with any ice or snow, or on horseback…and it went on for miles it seemed. I had to concentrate.

2)  Take the time to be mindful of each breath, when possible.

3) Take the time to be mindful of each bite of food, when possible.

feet must be dry.  The stops are perfect to dry my shoes and my feet.  Legs are very sore, especially hips, but keep going it gets better.  Only make sure every thing dries well.

In the Cathedral Pamplona Saturday Aygust 13, 2011 2:00p.m. Still one month on my walk to complete…so just at the beginning.  Surprised how quickly I reached Pamplona.  I walked 27 km and 25 km each day before today.  My nights today are to learn a language, learn the songs.  I asked Florence to teach me a French song as we walked.  it made the walk extremely pleasant.  I met some Spanish people who said my Spanish was very good, which I took as a huge compliment and wholly undeserved.  I took off my shoes and spoke with two men.    The french people had my pack carried to Pamplona, so I must go to their hotel to collect it. The Cathedral is very ornate, and I feel the attempts of men to elevate themselves and reach towards God.  Dinner with my french friends at the Cathedral, the entire area lit up with small candles sound and light, and different types of music in every corner of the city.

Now on a hill between Pamplona and Puenta la reina looking over the city of Pamplona…the pilgrims walk by like ants along the path…I hear and feel the wind from the windmills behind me.  I learn Spanish with the Spanish walkers behind me ow in front of me.  I stop for fabulous cafe and orange juice in pamplona.  I stay in Refusio in Center City near to the Cathedral.  #84 is my bunk bed.  Next time I walk Camino…take nothing…it will all be provided!!!!

In Obanos August 14, 2011  Tomorrow is Holiday of The Virgin—Lovely Auberge…Juan who runs it…Today at the statue of the virgin on a path of the camino towards Obanos, a couple drove up to take a photo of the virgin, because the man had been on The Camino.  he wanted to show his wife the spot where a traveling companion had taken a glowing photo himself with the virgin, whom he had prayed to for protection.  They are here to that her. I asked the couple to take a photo of me at the statue, which they obliged.

Yesterday I walked with a German…very fast pace…I liked it.  the germans, so precise and orderly. 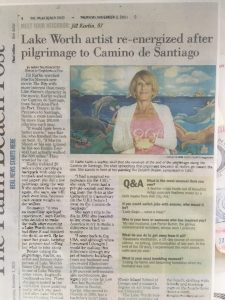 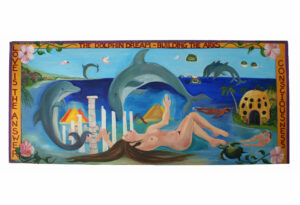 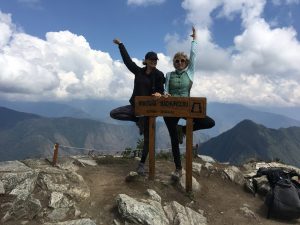 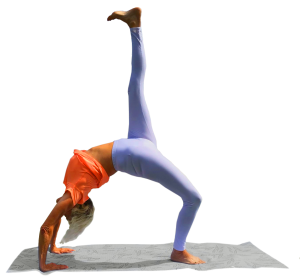